Constance Cherry finished the manuscript for a new book accepted for publication by Baker Academic: The Special Service Worship Architect: Blueprints for Weddings, Funerals, Communion, Baptism, and Other Occasions, forthcoming in 2013. In May she taught the course “Advanced Liturgy” in the Master’s program for Evangelische Theoligische Faculteit (Leuven, Belgium). In June Constance was a plenary and workshop presenter at a worship conference co-sponsored by IWS and the Central Florida Diocese of the Episcopal Church (Orlando, Florida). In July she was preacher, workshop presenter, and worship consultant-in-residence at The Conference of Church Musicians (Green Lake, Wisconsin), and also served on the faculty for the Local Pastor’s School of the West Ohio Conference, United Methodist Church, where she taught the worship unit. Constance is scheduled to do several workshops at the National Worship Leader Conference in San Diego (sponsored by Worship Leader magazine) in October. 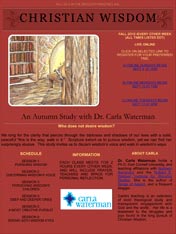 Carla Waterman is teaching the course Christian Wisdom live online this fall in 6 sessions beginning in September. The course will meet every other week and is offered at three different times: Sunday afternoon, Monday morning, or Tuesday evening. Carla writes, “Christian wisdom is not the domain of the intelligent, the scholar or the elderly. The wisdom to be discussed in this course is the integration of a growing relationship with God, a heart that is being purified through the suffering and sorrow of  this world and an expanding empathy for the cries of others—across the room and across the globe.  Wisdom is God’s communication to and with his creatures for the good of self and the world.” Registration is free and open to anyone interested. Find course details and times on Carla’s website, In the Kingdom Institute.

Sam Horowitz and his wife, Elise, are doing well in the midst of several transitions occurring more or less all at once. Sam answered the call to pastor Christ Our Lord Church in Woodbridge, VA in May; less than five weeks later, he and Elise (34 weeks pregnant) found themselves moving into their new home and starting their new ministries. Micah Ridley was born August 8 and the three of them are all still adjusting–but enjoying greatly their new life together.

New Faces in the IWS Office

Dianna Andrews is the Administrative Support Coordinator. She earned a B.A. in Christian Counseling from John Wesley College and has completed some Masters in Ministry coursework at Indiana Wesleyan University. She holds Ministerial Ordination with the Wesleyan Church. Dianna and her husband Dennis, who is a military chaplain, have two grown children: Kendra and Corbin.

Tracie Harley, Controller, is a CPA and holds a Bachelor of Science in Accounting and Social Science Education both from Florida State University. Additionally, she is a member of the Florida Institute of Certified Public Accountants and the American Institute of Certified Public Accountants. Tracie and her husband, James, recently celebrated their 15th wedding anniversary. They have three daughters: Mackenzie, 13, Brooklynn, 8, and Peyton, 6.

Mark Murray has been with IWS since October 2009. As of May 2012, he is the full-time Director of Enrollment Management, overseeing recruitment and admissions, new student orientation and course registration. He and his wife Courtney welcomed their first child, Abraham, into the world on May 4th. Mark is a recent graduate of Fuller Theological Seminary and is currently pursuing ordination through the Anglican Church in North America.

Ken Polsley is the new Library Associate. He has served as both a pastor and missionary, and is an enthusiastic supporter of IWS and our mission.

Carol Sittema, Librarian, is a Texas native who worked in Dallas for 25 years as an IT executive. After marrying in 2000, her husband John, a PCA pastor, answered a call to Christ Covenant in Charlotte, NC, and then to Christ Church in Jacksonville, Florida. They are passionate about resourcing the body of Christ in China, India, and other restricted areas, and are thankful that they can travel to these places regularly. Carol earned her B.S. from the University of Texas at El Paso and her MLIS from the University of Texas at Austin.