News from Alumni and Students, Summer 2013 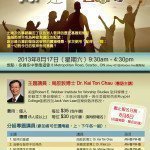 These three IWS alumni, together with other worship leaders, are presenting at a citywide worship training event in Toronto, Canada, August 17. The Worship Seminar and Workshop 2013 is a day-long event presented by Christian Communications (Canada), a Chinese Christian publisher and a multifaceted, worldwide community outreach organization. Kai Ton Chau is the keynote speaker. The theme is Worthy Is the Lamb. Three of the six workshops are led by IWS alumni: Foundations of Worship, Kai Ton Chau; The Role of Music in Worship, Khiet Lin; The Meaning of Worship Liturgy, Michael Wong.

Congratulations to Kai Ton who also reports that he was promoted to Associate Professor, Jack Van Laar Endowed Chair of Music and Worship, at Kuyper College, Grand Rapids, MI, as of July 1, 2013.

Phil and his wife Carolyn have been approved as World Partners missionary candidates with the Evangelical Missionary Church of Canada to serve in Mexico, where they will be involved in disciple-making, leadership/pastoral training, church planting and coordinating volunteer teams. They are currently visiting churches in order to raise ministry partners and financial support. 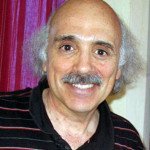 “IWS recently formed an informal global committee to promote the mission and vision of the Institute worldwide, focusing mostly on Asia. Seven DWS students, alumni and one faculty member serve on the committee. In my new appointment as IWS Coordinator of Missional Relations, I will help encourage and oversee ways for the IWS regional coordinators to extend the vision of IWS. I recently had the privilege of introducing worship renewal and the vision of IWS at a roundtable in Dallas, sponsored by the Lausanne Global Movement and the World Evangelical Alliance. Both networks have Task Forces that focus on the arts in mission. 25 national leaders ministering in the arts, music, media, Christian education and worship ministries attended. In September, I will attend a round table event in Sweden with delegates of the World Evangelical Alliance Mission Commission. This will provide another opportunity to introduce IWS to global leaders and challenge them to promote ways to release contextualized approaches to using the arts as part of worship renewal in established and emerging churches. Plans are in the making for a visit this fall to the South Asian Institute for Advanced Christian Studies, one of the leading Christian graduate institutions in India.”

“In April, I celebrated my 30th anniversary at Foxworthy Baptist Church in San Jose, CA. The church sent us to Hawaii for 10 days–all expenses paid! I taught the course “Worship and Music in the Faith Community” this summer at Golden Gate Baptist Theological Seminary in Mill Valley, CA. I used Andrew Hill’s Enter His Courts With Praise and Constance Cherry’s The Worship Architect as textbooks.”

Ruth presented a paper at the Christian Congregational Music: Local and Global Perspectives Conference at Ripon College Cuddesdon in Oxford, UK on August 1. The paper is titled “Who Gets to Sing in the Kingdom?” It is based on the perspectives she has learned through thirty-five years of helping non-singers find their personal singing voices.

Kely is now the Minister of Music at Mountain Brook Baptist Church in Birmingham, AL.

IWS Director of Distance Learning Technology, Sam has enrolled as a DWS student as of the June 2013 semester. He continues to work on making IWS technology creative and useful. One recent addition to the IWS website is the Archive tab that makes the numerous resources on our site more easily accessible. For example, you can search posts by author. You may also search the audio archives. In addition, a Textbook Exchange forum has been created in Moodle. Follow the link or find it on the Moodle homepage.

Pastor of Emmanuel Lutheran Church of Moose Jaw, Saskatchewan, John reports, “The congregation, for the most part, continues to put up with me even after 15 years. My worship studies at IWS have led to some short term teaching sessions at Briercrest College and Seminary in Caronport, SK in Theology of Worship. I have presented some workshop sessions on “The Use of Anointing with Oil in the Lutheran Church in Saskatchewan, Alberta, and British Columbia” based on a project paper I wrote for an IWS course. My IWS classes and thesis have been useful in the various changes in and additions to the Lutheran liturgy we have experienced over the years in Moose Jaw. The majority of people in the congregation have discovered the practice of anointing, times of silence in the liturgy, and worship study sessions to be meaningful and spiritually beneficial. Thank you IWS.” 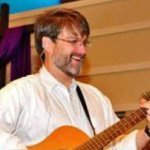 “I’ve recently returned from leading a two-week missions trip to Ireland and Northern Ireland (June 21-July 8). Our group assisted local congregations with Vacation Bible Schools, sharing the gospel in public schools, and musical outreaches (the Irish love American Gospel and Country music–not my forte!). One of the highlights of the trip was leading a seminar on worship renewal in the town of Monaghan, County Monaghan, in the Republic of Ireland. Five worship leaders from five area churches attended, all of which are struggling in the area of worship and worship renewal.” 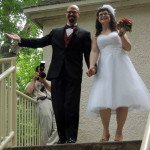 Kara was ordained to the transitional diaconate in the Anglican Church of Canada on June 9, taught the DWS 704 course as a visiting faculty member with Reggie Kidd for the June Session at IWS, and was married on July 18 to J. Keith Hyde. She is Associate Professor for Worship and Christian Spirituality at Providence University College in Otterburne, Manitoba, Canada, where she also serves as head of the Biblical and Theological Studies Department, and coordinates the chapel program.

Tony was selected as one of fifty fellows to participate in the in Inaugural Black Theology and Leadership Institute of Princeton University in July 2013. The institute is a week-long intensive designed for clergy and lay leaders who would like to deepen their thinking and preaching by learning from preeminent scholars of theology and religion. Tony presently serves as Director of Worship & the Arts at Historic Ebenezer Baptist Church in Atlanta, GA, the spiritual home of Dr. Martin Luther King, Jr.  The choir at Historic Ebenezer recently performed his arrangement of the National Anthem during the 2013 75th NCAA Final Four Basketball Tournament at the Georgia Dome in Atlanta. 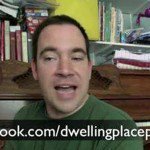 Simon is a web developer for Christianbook.com. He recently recorded a new album called The Dwelling Place Project. (Click the photo at the right to view a short video he has posted on Facebook.) Simon writes, “The album is to help raise awareness and support for my family’s unfolding adoption journey. It will include four songs I composed as part of final projects for MWS courses at IWS. In addition, I’m working with fellow IWS alum Chris Brewer to develop a master’s level course on Technology in Worship for the Kaleo Institute.  This class is slated to be offered online in the spring of 2014.  I’ve been developing and articulating much of my thinking for the course on my Tools for Worship blog. I’ve also had the chance to teach computer science courses on databases and Internet programming at Gordon College.  This has been a great opportunity to help students integrate their faith and worship into their studies in a discipline that is often considered ‘unspiritual.’ I have actually found that there is a lot of overlap between the processes of writing a computer program and composing a hymn or worship anthem. All of life is worship, and there is no boundary between what is ‘sacred’ and ‘secular.'”

As of July 1, Dyton began as Senior Pastor at First United Methodist Church in Lexington, NE. He describes the move as a “turn-around” opportunity. “My responsibilities will include worship renewal, church growth, multimedia enhancements, broadening social media, lay leadership development, and working with the Hispanic worship community. We covet your prayers!”